Hazleton was incorporated as a city on December 4, 1891. At the time, the population was estimated to be around 14,000 people. Hazleton became the third city in the United States to establish a citywide electric grid in 1891. During the 20th century, the population grew through the “boom period,” from 1885 to 1920. In 1860, the population peaked in 1940 at thirty-eight thousand. 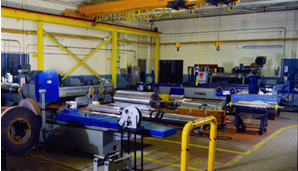 With increased population came increased business, main street businesses, large campuses like Penn State Hazleton, and of course, manufacturing. Due to the success of the CAN-DO (Community Area New Development Organization) campaign, Hazleton was given the All-American City Award in 1964. Hazleton’s economy is now based largely on manufacturing and shipping, facilitated by both Interstates 80 and 81.

Manufacturing is the basis of business growth. When industrial rolls in Hazleton need service, they ship their rolls to MP&P for fast, dependable, and proven solutions. Companies, especially now, cannot risk delays when their rolls require repair, fabrication, grinding, plating, or acid flushing. For over six decades, MP&P has provided single-source roll fabricating, plating, grinding and full-service roll repair. Customers need to get their rolls back on the plant floor to produce. MP&P brings years of seasoned expertise to every roll they handle. That’s why Hazleton, Pennsylvania’s industry calls on MP&P for industrial roll solutions.